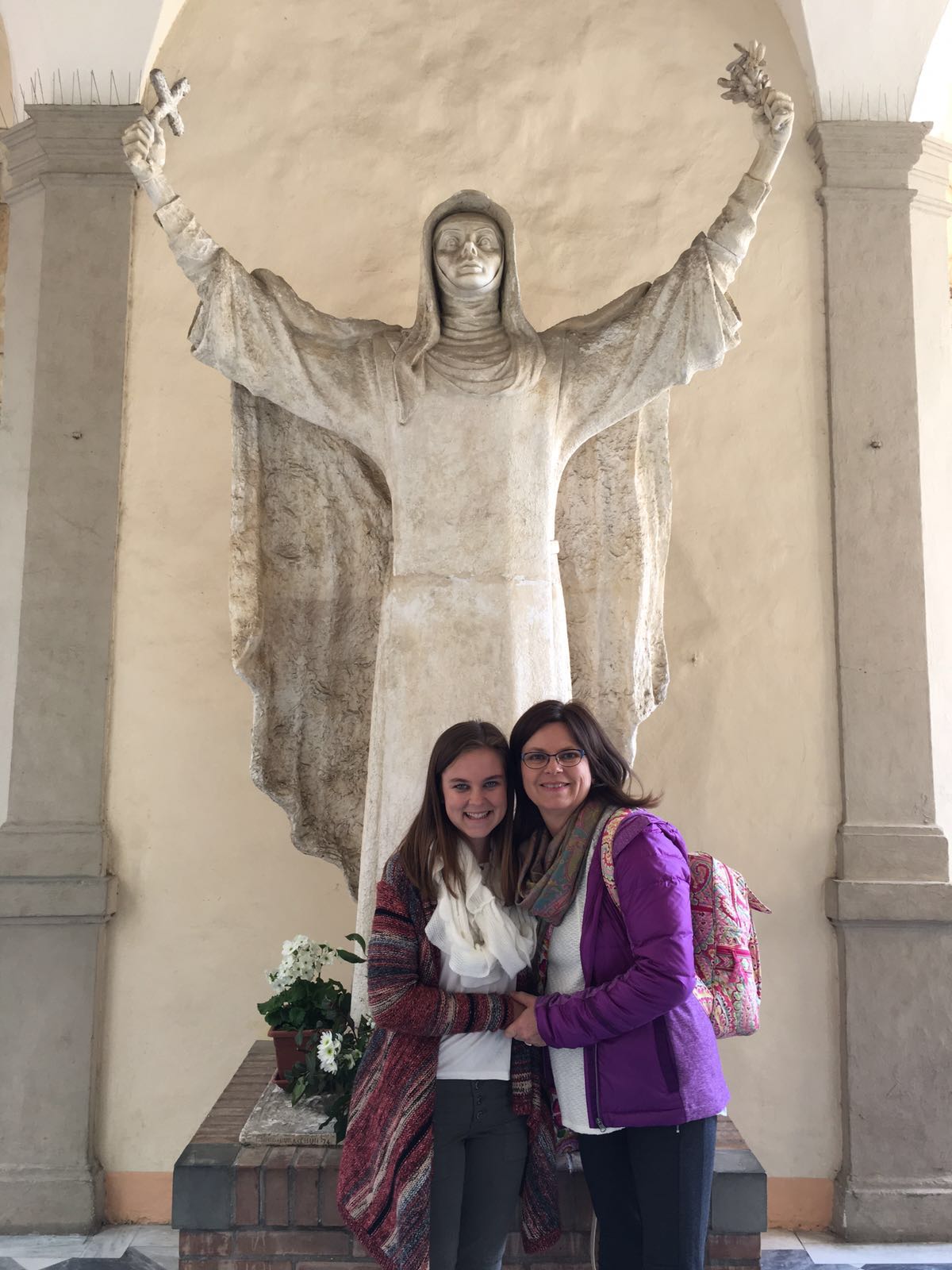 When Flintridge Sacred Heart Academy‘s religion department announced that a trip to Italy was in the works, I immediately signed my daughter Hannah up. Now mind you, she was an incoming freshman, and I knew I would hear, “I am not going if none of my friends are going.” Sure enough, she said exactly that when I told her, but I started paying for her trip. Then I thought, “Now how can I get on this trip?” since it was not open to parents or even other faculty members. Perhaps they would like to have the school nurse as a chaperone? … I was beyond excited when Sr. Mary Therese Perez (a.k.a. Hermana) came to me and said they would like me to attend.

This would be a trip of a lifetime! ‘Pasqua Italiana: Through Dominican Eyes.’ A Dominican Pilgrimage. Holy week in Rome. A Papal Audience. Walking in the steps of St. Francis and St. Dominic. Easter Sunday mass at a chapel built on the site of St. Catherine of Sienna, a Dominican. Could there be anything greater than experiencing this with the young ladies of FSHA and my daughter Hannah?

I traveled to Rome for the first time with my mother and my sister, Kristen Friese Gannon ’85, in 1989, and I vowed than that I would return sometime. (That toss of the coin into Trevi Fountain really did work!)

I was so excited to embark on this Dominican journey during which we were actively living the four Dominican pillars of study, prayer, community and service. I felt like one of the schoolgirls— so full of energy and life. Each day was a new adventure. The days were long and full of so much to see and do and eat: pizza, pasta, gelato and cappuccino to name the best. 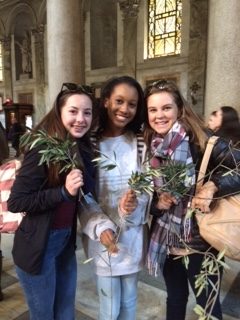 Our first morning in Italy we went to Palm Sunday mass at the Basilica of St. Peter outside the city walls of Rome. Apparently they don’t pass out palm leaves but rather olive tree branches. It was a beautiful mass at the back altar of the Basilica.

Our home in Rome would be on a hill overlooking the Coliseum. Half the group stayed with the Passionist priests and the other half stayed with an order of Carmelite nuns.

In Rome, we toured the Coliseum and the Forum, traveled outside the city walls to tour the Catacombs. Visited the Pantheon and Trevi Fountain more than once and saw the Spanish Steps. Piazza Novona became our meeting spot. From here, the girls had free time to explore, eat and shop on Via del Corso; participate in a very competitive scavenger hunt of Rome; and eat great pizza and gelato.

“The feeling I experienced in Assisi has strengthened my faith and empowered me to want to do more to enhance my spiritual life.”

The highlight for me in Rome came on Wednesday when we visited the Vatican for our Papal Audience. There was moaning and groaning about the early morning start, but we arrived at the Piazza San Pietro at 6:30 a.m. to stand in line. Once the gates opened it was a mad rush to the seats in Vatican square. We were so fortunate to line up along the center aisle to see Papa Francisco. I was so touched to see the joy and excitement in the girls faces as we waited to see the holiest man on earth. I was filled with such awe as the Pope mobile passed and Pope Francis waved. I could have touched him; we were that close. 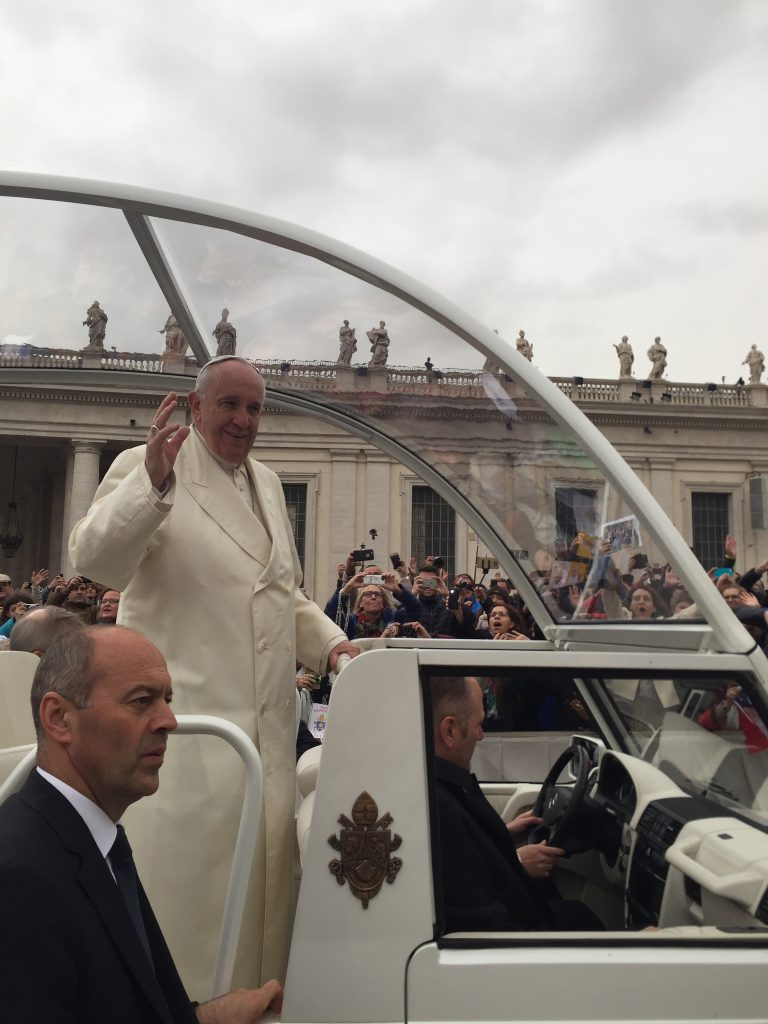 In the afternoon we toured the Vatican museums and passed thru the Doors of Mercy as we entered The Basilica di San Pietro. As you can imagine the Basilica was packed with tourists since it was Holy Week. Several girls and I ended the day walking the 551 steps up to St. Peter’s Dome or ‘cupola.’ As they say, it is the best view of Rome, and this is most definitely true! This was a remarkable site to see on our last day in Rome. 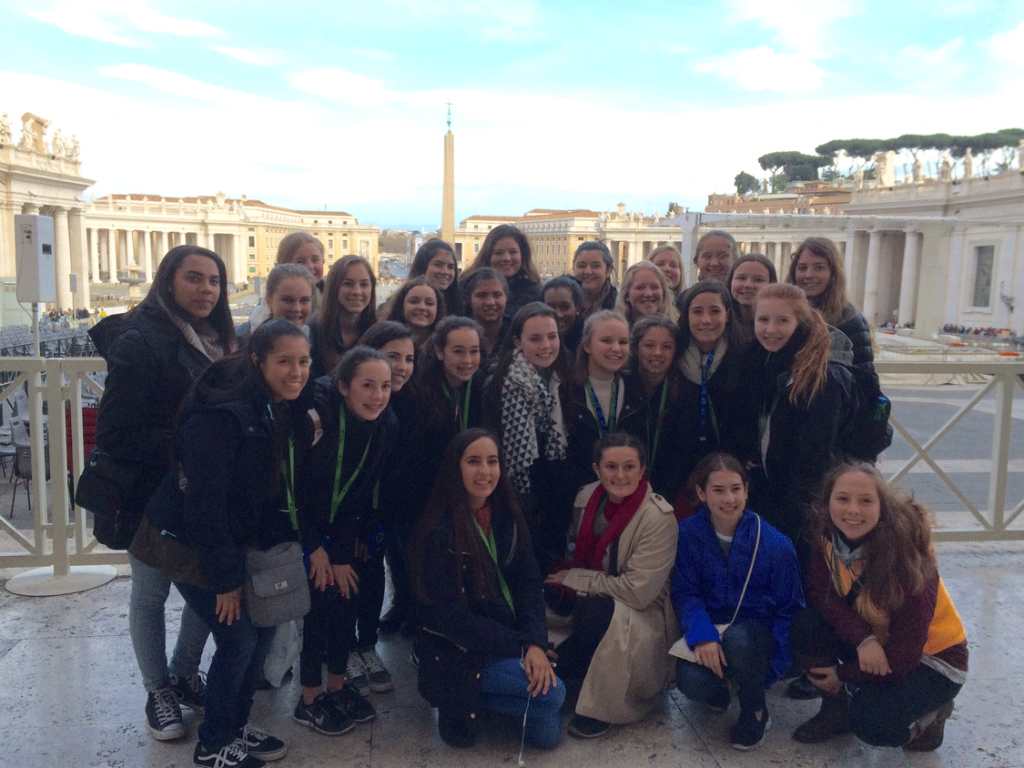 The next morning we traveled to Bologna via private bus and stopped in Assisi for a couple of hours. We marveled as we walked the streets in the footsteps of St. Francis and St. Clare. I think we all felt the sacredness of the city. The entire city of Assisi, particularly the Basilica, have a definite atmosphere of peacefulness that awakens and stimulates the human heart. I know all the girls would have welcomed more time in Assisi; I know I did. The feeling I experienced in Assisi has strengthened my faith and empowered me to want to do more to enhance my spiritual life. 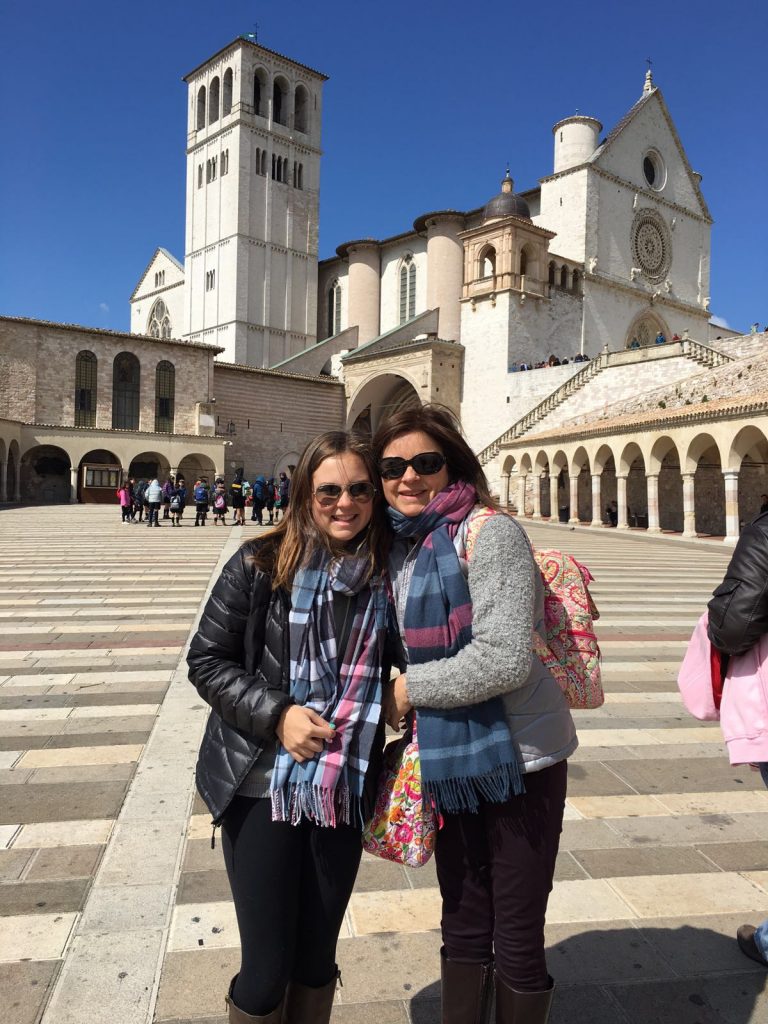 Back in the bus we made our way to Firenze/Florence, the birthplace of the Renaissance and home to masterpieces of art and architecture. Our hotel was walking distance to The Duomo/Cathedral of Santa Maria del Fiore. The red tile dome, colored marble façade and white marble were stunning to look at. Over the next couple of days we explored the beautiful city, had a private walking tour, saw the larger than life Michelangelo’s David in the Galleria dell’Accademia, shopped for leather goods and stood in awe on Ponte Vecchio, the medieval arched river bridge with Roman origins. We traveled to Bologna for a day visit to see University of Bologna, the oldest university in the world. In Bologna we had a cooking class where we learned to make pasta. The meal that followed was several courses and by far the best food we had eaten in Italy. 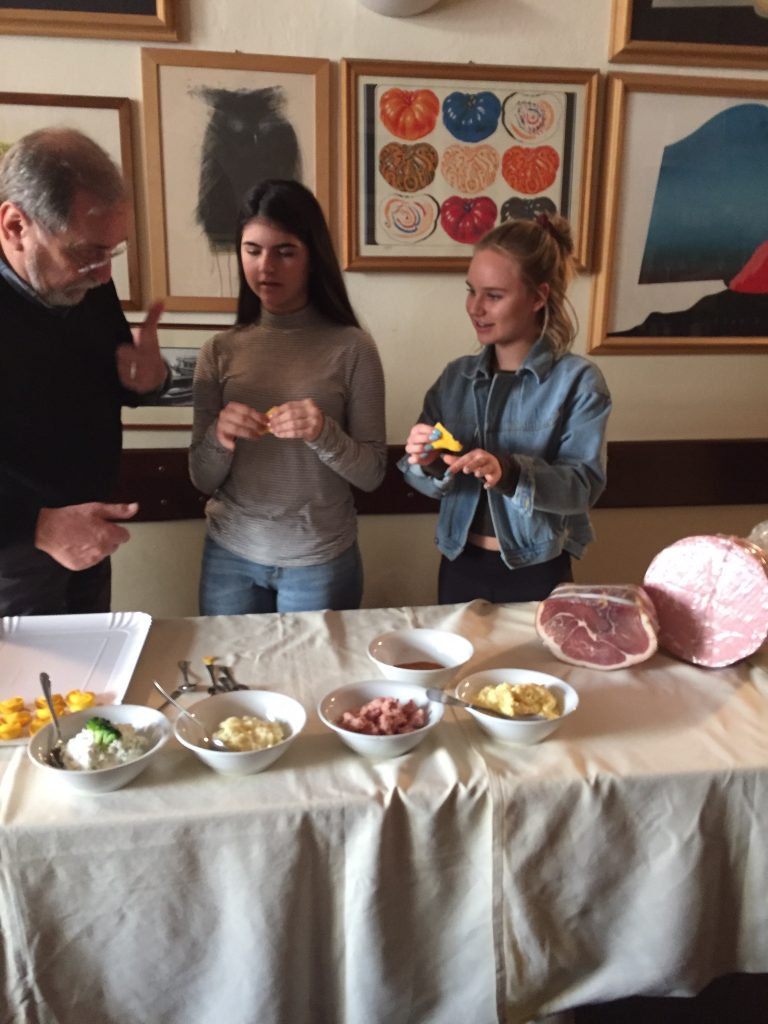 On Easter Sunday we arrived in beautiful Siena the home of St. Catherine of Siena the first lay-affiliate of the Dominican Order who is famed for her intellect and mystical visions of Christ. We attended Easter Sunday Mass in the chapel built on the site of her childhood home. It was very moving for me to be in this sacred space, feeling so blessed to have this experience on Easter Sunday. 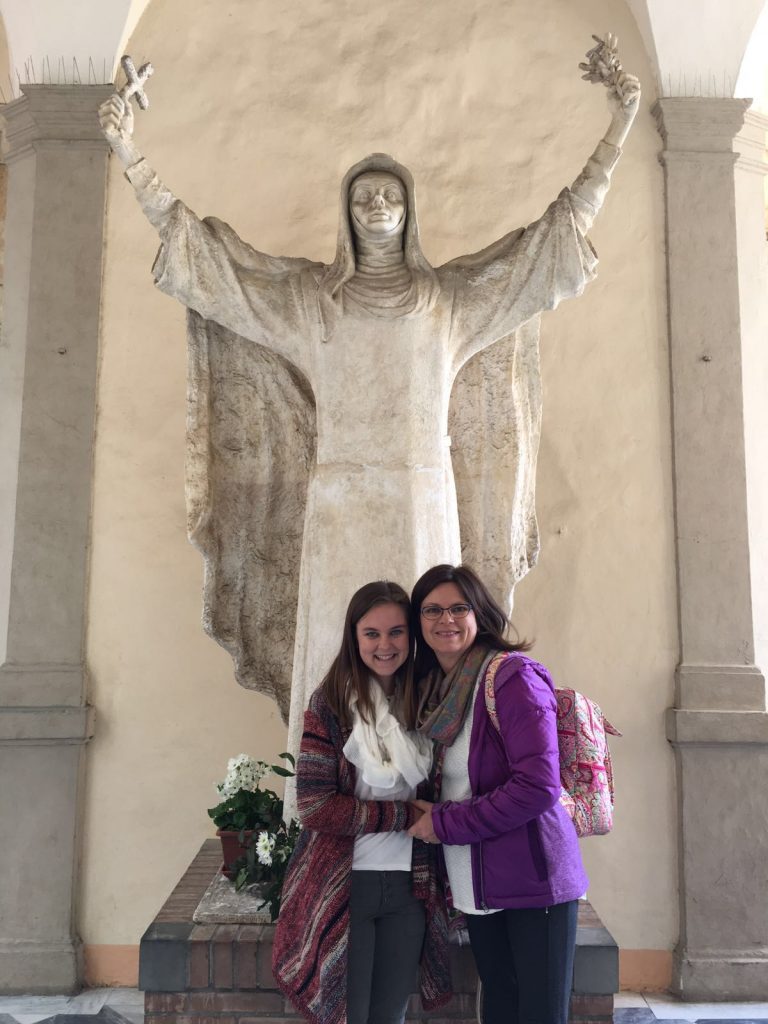 At the end of mass the priest gave every member of the congregation a replica of the cross that Pope Francis wears. The cross depicts Christ the Good Shepherd leading the flock and carrying the lost sheep on his shoulder. On the top of the cross is the Holy Spirit.

Receiving this cross was such a beautiful reminder to me to be that ‘good shepherd.’ We are all called to reach out to the lost sheep of the people of God and far beyond, especially in this Year of Mercy.

I am so grateful to have been a part of this Dominican Journey with Hannah and all the students and faculty! I would like to thank Sr. Mary Therese, Kristina Ortega and Juliette Marsh for allowing me to join them on this amazing adventure. I feel so blessed to have shared these experiences with my co-workers and it was great getting to know each one of them in a new and special way. I also want to thank the students of FSHA. I have to say I was really touched by the way they all got along so well. These ‘FIT’ (faith, integrity and truth) young ladies truly lived as one community that strengthened their faith, acted with integrity and sought after and found the truth. It is a trip that I will always remember and the memories will stay with me for a lifetime! CIAO!

At first I did not want to go on the Italy trip because I did not know anyone, but my mom signed me up anyway. It ended up being a really great trip and I am happy she did. I made so many new friends, other than just the freshman. The trip was an incredible experience that I was able to share with my mom. The group of girls that all went were all very nice and funny. 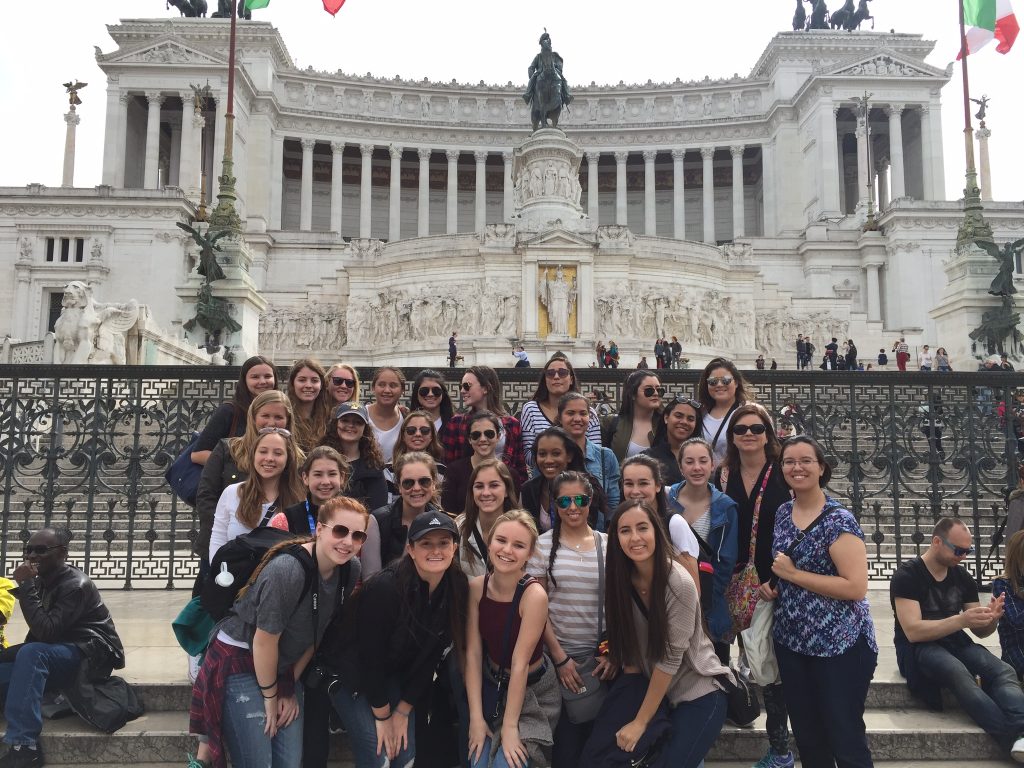 There are so many great memories … Amy Altman always found a way to crack the whole group up. We were at a restaurant in Bologna and she says, “I just ate four spoonful’s of Parmesan cheese. One was a dare the other three were voluntary.” We all laughed as she said this, and even Hermana tweeted it.

The bus rides to and from places were so much fun because we would play music and we would all sing and find a way to dance in our seats.

At the place where we were staying in Rome there was cold cereal for breakfast. Gabby Lopez got cereal with milk, but the milk ended up being hot milk. She said, “I wondered why it was steaming.” We then asked for cold milk, and they brought out cream that you would put in coffee. So, this is when we realized that the breakfast in Italy is a lot different than in California.

In Rome we had a scavenger hunt. There were probably three or four teams, seniors and freshmen together, juniors, and the sophomore split up into two groups. It was so much fun because we really had to go all over Rome from Piazza Navona and beyond to find things. We asked a bunch of Italian people to help us with the answers! We needed to find some type of newspaper, (I forget exactly what) and Marin Telleria was taking a picture of a magazine at a kiosk. The man working there came and slapped her and told us to leave. I guess we weren’t allowed to take pictures!

My favorite time in Italy was when we stayed in Florence. Marin Telleria, Gabby Lopez, Kirsten Polzin, and I all shared a room. It was so much fun because they are all very funny. It didn’t matter who we stayed with as long as we were having fun, and every single person was fun. I wish I could go back with the whole group! There are so many stories, and I could talk about every day in Italy, but these are just a few. Italy was so much fun and I am so happy that my mom signed me up and I got to share this experience with her. I hope someday to go back with my whole family.