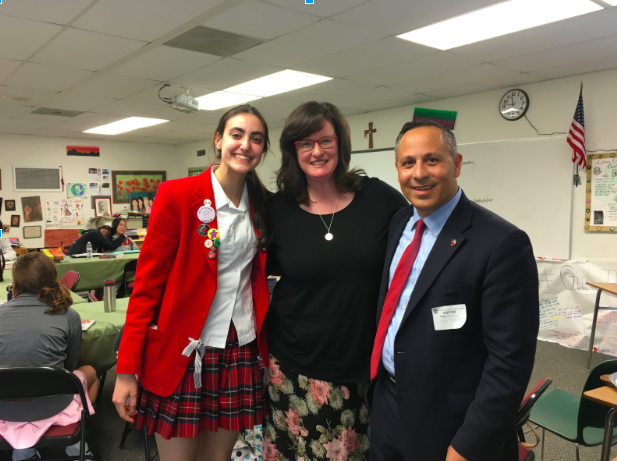 When I went to Armenia for the third time in the summer of 2015 I was inspired by my homeland’s beauty, poise and people. The first time I traveled to Armenia was in 2009, therefore I was too young to truly appreciate its culture and history in the same way I do today.

During the summer of 2015 I was a rising junior at Flintridge Sacred Heart Academy and had recently started the Armenian club at FSHA. We were a new club with so much to share with the school community. We started with the basics: selling our delicious foods on campus. This was a good start, but only scratched the surface of the Armenian culture. I was thrilled to have this platform and have a voice as a leader in my school community, but I was unsure how to use it. Later that year my family and I traveled to Armenia: a place that makes me feel as if I’ve traveled to another world. I feel personally connected to the land, people and history. Life is very different in Armenia.

In 2015, we revisited almost every landmark in Armenia: about 15 of the oldest churches in the world, historic landmarks, monuments, museums and of course the Armenian Genocide Memorial. Re-experiencing the “tourist experience” as a teen was very different because I better understood what I was seeing. When I came back from Armenia that year I felt more attached to my homeland, more connected, passionate and eager to bring it all back with me to America and my community. It was impossible to try to physically and figuratively translate all that I had seen and experienced, but the one thing I could do is give my people a voice in my own way.

Armenia’s deeply-rooted, historical monuments are physical evidence of Armenia’s existence and strength. Turkey’s systematic killing of 1.5 million Armenians is the absolute evidence yet Turkey still denies the Armenian Genocide’s existence, claiming that it never happened. Mount Ararat, a majestic snow-capped Mountain is the most important national symbol of Armenia and a sacred mountain. Seeing Mount Ararat from the window of the Sardarapat Museum next to the Sardarapat Memorial made Mount Ararat’s meaning clear to me. A major symbol of Armenia is located in Turkey. It’s as if they have control over our identity. How is that acceptable? They took our land, our people, and our belongings, but they will not take away our culture, language, perseverance, our strength, respect and grace. We are a nation of strong, resilient people who fight for what we believe in until the end.

Mr. Hamparian spoke during Ms. Juliette Marsh Williams’ religion classes. He educated me and my peers on the importance of the recognition: not only does the denial allow it to happen again, but it makes it seem okay. This is not acceptable in any way, therefore being an “upstander” and not a bystander, as Mr. Hamparian mentioned, will make a big difference. I invited Mr. Hamparian because something so important to my background should be known. Most people have never heard of the Armenian Genocide, so I felt responsible for properly educating my community about it. If my peers are educated about this issue, they can help seek justice and the truth, they can help make a difference to help the Armenian Genocide gain recognition. In the end, FSHA is about Veritas and community, these are at the core of the Armenian Genocide, seeking truth and working together as a community to achieve it.